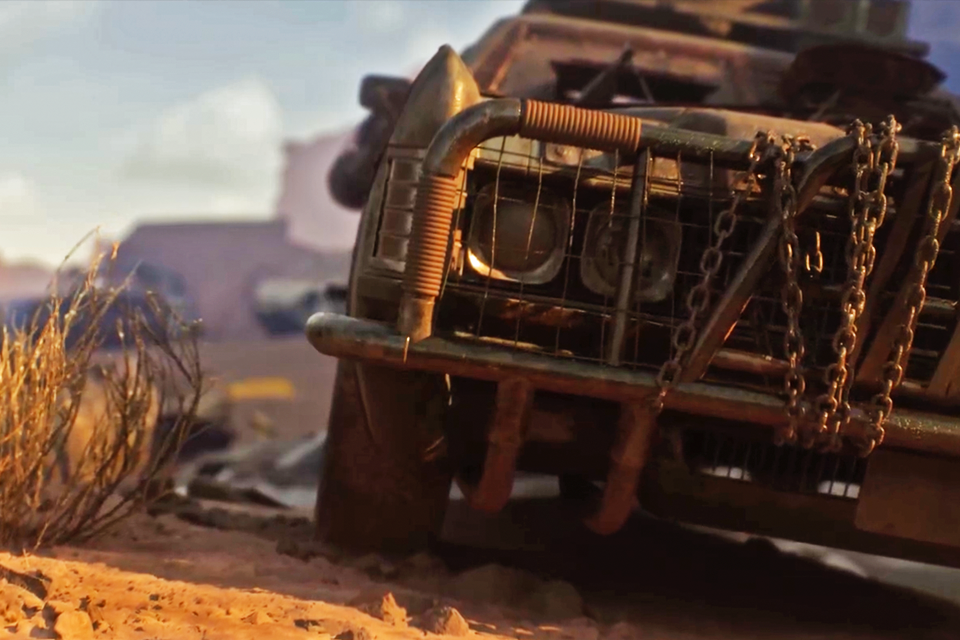 With a filmmaking playground literally in our backyard (studios), our VP Supervisor, Raphaël Gaudin together with our creative team wanted to produce a piece that was inspired by our tech’s capabilities.

Car chase sequences are usually complex to previz in a traditional linear workflow. We wanted a piece to showcase how efficient and creative our VP tools are to use. There is also a playful synergy between being able to create animation and action for directing that feels like gaming on your favourite console.

The end result? Wasteland, a one and a half minute animated car chase sequence made up of 41 shots with diverse camera setups including drone, onboard vehicles, aerial and handheld shots.

Our Virtual Production Supervisor and Director of Wasteland, Raphaël Gaudin answers your questions.

Why did you want to make Wasteland?

Wasteland is an internal project that we created to showcase our Virtual Camera and Live Editing capabilities together with Unreal Engine 5.

We knew we wanted to do something that would be challenging to create in a traditional manner. Our goal as a studio is to help filmmakers achieve their vision using our stages and custom VP tools. We decided on a dynamic car chase sequence. It had to fulfill a few key elements; organic and fast pace with a wide range of camera angles and techniques.

How long did Wasteland take to complete?

The 1 min, 30 second story is made up of 41 shots and from concept to final edit including sound design and colour grading, it took 3 weeks.  The team included 6 VAD artists, on-set included 3 Supervisors and 3 UE TDs. I was both the director and editor as it allowed me to have full creative control and made the process more fluid.  However, most directors we’ve worked with rely on an on-set editor, which is what our VCAM and Editorial stages are for.

We used Unreal Engine 5 as our main tool. During shooting and on-set editing, we also relied on DaVinci Resolve for colour grading and offline editing. No compositing work was done after the shots were rendered.

Can you tell us about the soundFX?

We knew sound was going to be a big part of this piece because we didn’t have any dialogue to convey the story and the cars are essentially the main characters. We also had a lot of cuts because of the direction and pace. Engine sounds were key to the success of the sequence. We invested some time in building motor vehicle sounds straight into UE5 so we could record it during shoot day. We didn’t use it in Post but it turned out to be a very useful reference for SFX, which was created by Studio X Labs. Music was composed in-house by one of our TDs, Evan O-Reiley.

I liked it very much and it was a very enjoyable process, as well. It helped me put myself into a creative head space. Using our real-time tools, gave me a unique perspective as both the client (director) as well as a crew member who is there to educate other directors and DPs on our workflows. I was able to give valuable feedback to the team.

What software and hardware did you use on Wasteland?

We used Unreal Engine 5, Autodesk Maya for asset creation, DaVinci Resolve for colour grading and editing and UE5 for everything else, which includes environment layout, rigging, stage operations and rendering. The project was rendered on a single NVIDIA A5000 GPU, peaking at 23gb of VRAM. The card’s capacity is 24Gb.

What were some of the challenges you and the team faced?

There was always a debate around the way we should approach the day of filming. We had doubts whether to record the cars performances and the cameras separately or recording all performances simultaneously. We ended up being more efficient shooting performances and VCAM all at once, live and on-set. This meant we could keep cameras rolling for longer takes and have more material faster  and allow for happy accidents (no pun intended). It also depends on directorial style but I fully embraced it.

What would surprise people to know about this short film?

The cars were not hand animated, in fact nothing was hand animated for this project. The cars were set up with the UE5’s CHAOS Vehicles system and the cameras were recorded using our own VCAM solution. The cars were animated using game controllers live and while filming. Actually 3 cars were used to achieve this; two are visible in the sequence and a third car was set up to hold the VCAM on most shots.

I always suspected that we would have to do some sort of animation “fixes” at some point, but we didn’t need to.

What’s next for Wasteland?

On its own, this is a fully realized project. However, you can take this high end previz as a prototype/test for quickly realizing your vision using Versatile’s tech and bridging the gap from previz to final pixel LED content.