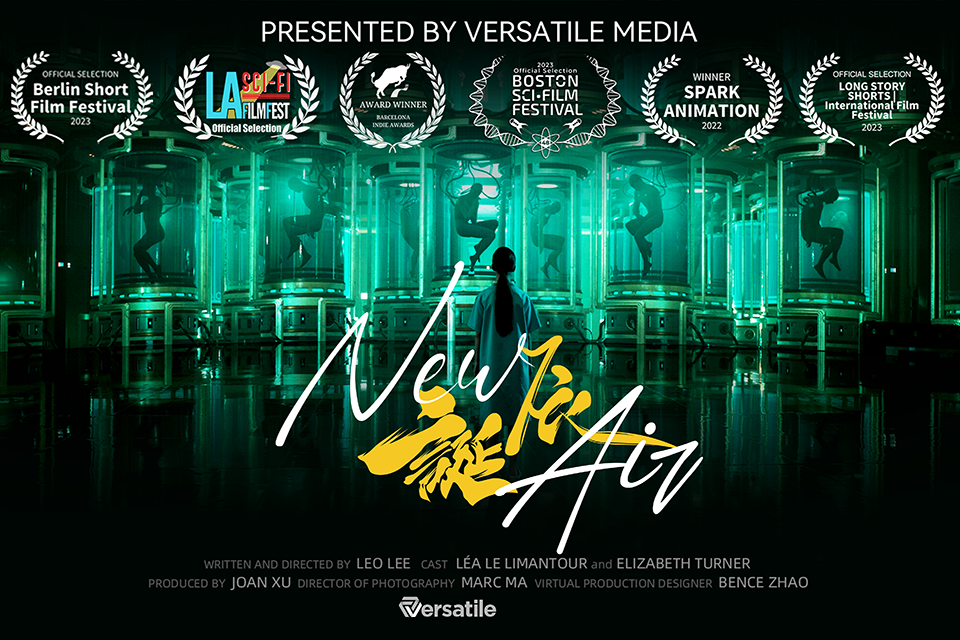 Last year was a motivating start to our creative slate and our short film, New Air.

Produced entirely using our studio’s virtual production workflow on one of our largest LED Volumes, New Air was completed in just ten days without any VFX in post-production with four of those on principal photography on an LED stage.

Visual Effects is taking on a new form as In Camera VFX or  ICVFX are gaining recognition.

At this year’s SPARK Animation Festival our Sci-Fi short New Air made its Canadian debut and was part of an exceptional selection of animated and experimental films. New Air premiered in October and was awarded BEST VFX for Narrative Short Film.

The film’s sci-fi category was also recognized by the iconic Boston SciFi Film Festival and is an official selection in the longest running genre film festival in the U.S., which celebrates its 48th year in February this year.

“For a film to achieve recognition for its VFX that were not created in post-production but rather in-camera, this shows that our industry’s perception on digital effects and how they are created are beginning to shift. It’s exciting for us as a company.”

The project picked up a number of awards at the Barcelona Indie Awards International Festival, a yearly competition with live screenings. New Air was named Best Short Film, Best Sci-Fi and Best VFX.

In addition to the technical achievements, our team is also proud to bring audiences around the world an original story exploring the process of civilizational demise and rebirth.

As our LED stages in Vancouver open and new construction in China begins for an additional 5 stages, we are ready to expand to a global audience. The world of storytelling extends beyond borders.

Berlin Short Film Festival will take place this summer with New Air as part of the sci-fi category screening.

New Air has received an overwhelming welcome from the international independent film community. To date, it has over 56k views on our Youtube channel, 400k views globally on streaming platforms like Bilibili and Youtubers sharing their enthusiasm and love for the genre to their fan base.

As a company and creative entity, we will be continuing both our R&D, virtual production and filmmaking with ongoing preparation on producing more original sci-fi projects including a Sci-Fi Anthology Series this year. We are continuing to break barriers in virtual production to tell better stories in new and innovative ways.