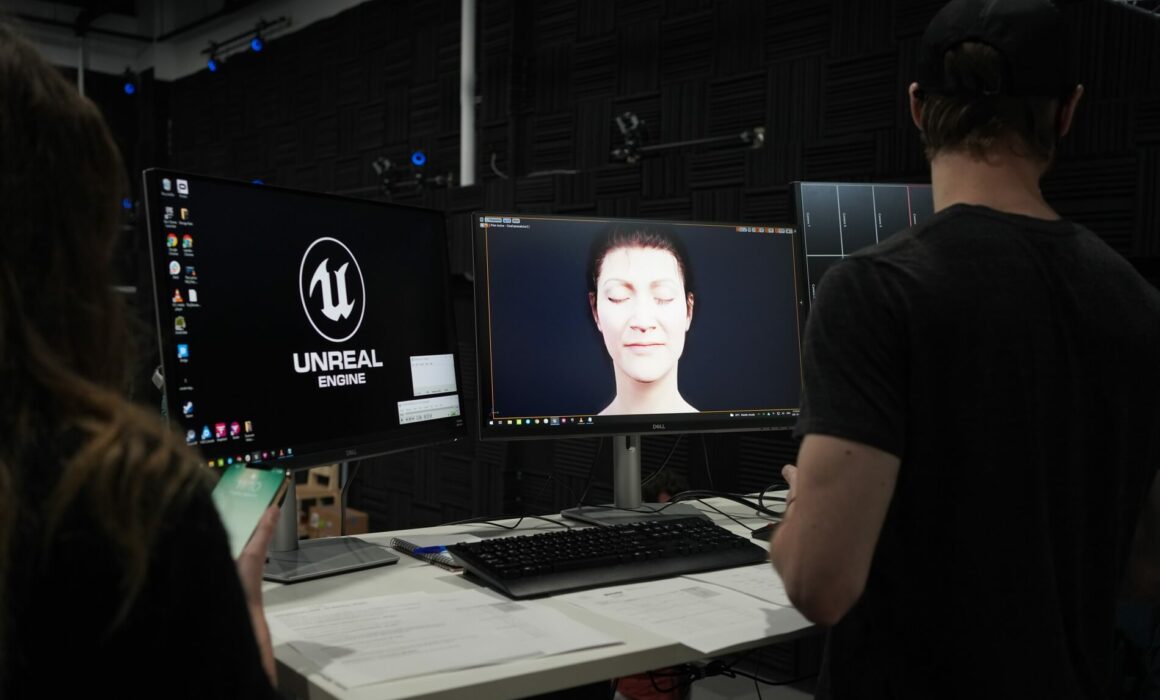 Located in the Ironworks building, Versatile Media studios’ 12,000 sq ft unique location houses 2 motion tracking stages running on an Unreal pipeline. At 3,500 square feet each and located in the Port Town district of Vancouver’s east side, they serve as the company’s Canadian headquarters.

Our Vancouver studio is a purpose-built virtual production facility that offers benefits to both live-action and fully animated productions.

The Performance Capture stages include 70 Optitrack cameras running on Motive 3.0 for ultra-precise camera tracking for next-gen filmmaking, integrated into the real-time engine Unreal. Virtual Camera Systems (VCS) together with game engine tech that replicates a physical cinematographic filming experience.  Full pro-stunt rigs are also set up for extreme motion capture choreography within a 22’ ceiling clearance. A VR system for location scouting (HTC Vive and Oculus Quest), full body, face and intricate hand performance technology for lifelike animation. Ability to capture up to 6 performers at the same time in a fully soundproof sound stage, which allows for voice and audio recording.

The second stage was exclusively built for Visualization and Cinematography and also boasts a 22 ft. ceiling clearing and fully soundproof.  This previsualisation stage is again equipped with Optitrack solution, real-time streaming into Unreal engine and a VR system allowing directors to shoot their scenes, explore and build their edit as a precursor to continuing the virtual production workflow to LED volumes.

For live-action projects, our motion capture stages are designed to Pre-Vis complex shots or sequences enabling directors and cinematographers the freedom to explore and resolve the editorial process ahead of principle photography. Our workflow can deliver exact camera movement and lensing information to live-action crews reducing time and risks when on-set and on location. This gives assurance to producers, directors and on-set crews, who can now deliver the complex sequence with efficiency.

Due to the recent advancements combining game engines with other technologies such as photogrammetry, the virtual world can replicate the real world with such accuracy that it offers significant advantages to the whole filming process. Starting with ‘virtual scouting’ where scouts can plan locations using digital photogrammetry data. This same data can then be repurposed to create the photorealistic digital sets for use with LED technology during principal photography.

For 3D animated productions, we introduce live-action workflows that benefit animated content including cut sequences for games. The advantages of such a workflow promote faster creation of content and enable your creative leaders the ability to explore the story and editorial processes in a real-time environment. This leans animation productions towards a live-action on-set workflow that will drastically increase the efficiency of the creative process.

Integrated into Versatile’s studio is a team of senior digital artists that have developed creature tools, digital environments and have solved the virtual production key pipeline challenges. Having this team located onsite allows clients  & creatives the assurance for on-the-spot interaction problem solving to meet the demands of production. The purpose built stages and artist pit are separated by a 30′ folding wall that opens to enable integration of the digital and production teams when needed.

The 12,000 sq foot studio also has a theatre room with a 172” screen for reviewing the daily output of production shots.

Our mandate as a studio is to provide filmmakers with our pipeline’s abilities without them needing to learn the technical complexities of the virtual world. Enabling them to use their experience and knowledge without being occupied by the technology itself.

Consulting on the strategic development for Versatile’s technical services is Industry veteran Nancy Basi.  Most recently, Ms. Basi was the Executive Director of media +entertainment for the Vancouver Economic Commission (VEC) where she worked strategically to promote and  grow the digital entertainment and interactive industries for the City of Vancouver. Included in her file was film, VFX, animation, gaming, post production, music, VR/AR and esports. Her unique 360 perspective to screen based entertainment when applied to trade, investment and talent initiatives, developed new ecosystems and cross sectoral opportunities enabling business and job growth. Prior to joining the VEC Nancy had a 20 year career in the film industry in physical production, visual effects, animation and studio management.

Joining the Versatile team combined my passion for the screen- based entertainment industry and the technology that supports it.  Versatile offers the complete solution from creative development,  real-time previsualisation, motion capture to final delivery.  Versatile choosing Vancouver as its North American headquarters to develop their virtual production workflow will be a huge asset to our film and animation industry.

Our Vancouver Performance and Visualization studios are open for bookings, demos and tours by reaching out to our business development team or by emailing sales@versatile.media

Versatile Media is a global film production studio founded in 1993. The company has over 500 creative and technical artists and R&D staff working together from its multiple international studios.

The company also has IP projects in development and is actively seeking co-production opportunities to produce within a virtual production workflow.

Vancouver’s purpose-built full service virtual production studios are located in the newly developed Ironworks Building in the heart of Vancouver.